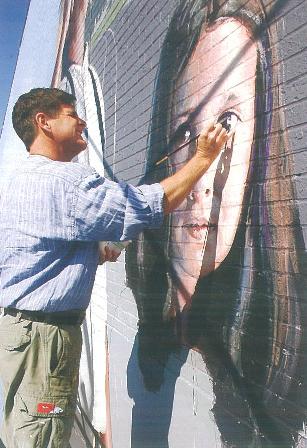 Born in 1960 in Chicago, Illinois and raised on the Gulf Coast, Wes Hardin studied Illustration and Advertising Design in South Florida at The Art Institute. He has worked as a muralist and illustrator for the past 29 years, having been awarded his first mural commission at the age of 18. Wes has worked throughout South Florida as a freelance designer and illustrator both for private and corporate commissions, in addition to working with various ad agencies. In the Fall of 1989, he became creative director of Durden Outdoor Displays in Dothan, Alabama, where he worked until 1999. Wes continues to live and work in Dothan as a portrait artist and muralist.