The beautiful city of Andalusia located in the “heart of South Alabama” has a fascinating history which begins on the banks of the Conecuh River at the trading post community called Montezuma. Even though this early settlement below the falls was called Covington Courthouse, the first county seat shown on old maps (1826), by 1829, the name of the post office and the village had changed to Montezuma. To this day, it is uncertain as to how Montezuma got its name. Historians say that it could have been the Spanish influence of the traders up and down the river to Pensacola or possible refugees moving in from the Mexican Revolution which had just ended.
In 1817, the Alabama territory was formed. The State of Alabama was admitted to the Union in 1819 and Covington County was made a county by the newly formed legislature in 1821 and was named in honor of Brigadier General Leonard Covington, a native of Maryland and hero killed in the War of 1812. Covington County was created from Henry County and through the years has been reduced to its present size by the carving out of Dale and Geneva Counties.
After the Creek Indian War of 1812, legend has it that Andrew Jackson traveled through this area marching troops en route to New Orleans initially marking a “Three-Notch Trail” through this wilderness enabling him and his troops to find their way back. It is believed that he or some of his troops camped just north of the present Andalusia city limits near the Heath Community at Soldier’s Head Creek. Other trails were blazed and marked in 1824 through primeval forests from Pensacola to Ft. Gaines, Georgia intersecting the Federal Road begun in 1806 by the federal government establishing a military and postal road from Washington to New Orleans as well as a trading route to the Indians and a route for settlers moving in from Georgia and the eastern states into the interior of Alabama to build homes and begin farming. From Ft. Crawford near Brewton, the Three-Notch Trail continued along the high ridge line between the Conecuh, the Yellow, and the Pea River watersheds. Since the Three-Notch passed through the area of Andalusia and Troy, streets in both of these towns have been named “Three-Notch” to commemorate the road.
Eventually, a path was worn and wagon ruts appeared as settlers soon moved into the new state and into Covington County settling first around Green Bay (1816) and Rose Hill (1823). An early settler who passed through Georgia as he migrated to Alabama named John Devereaux became the first postmaster of Montezuma in 1826 and received a lifelong appointment as a county court judge. His service and contributions are well-documented, and he is commemorated by the naming of the hill where he resided, “Devereaux” or “Debro Hill” as we know it today. As the county’s first senator, he sponsored the enabling acts that created the county thus he is considered by historians to have earned the title of “Father of Covington County.” Due to political and personal circumstances, Devereaux later moved north to the Union Springs area for a few years and eventually moved westward to East Texas.
It was in the year 1841, a flood in the lowlands around Montezuma that became known as the “Harrison Freshet” was the catastrophic event bringing mosquito fever and devastation to the buildings and homes forcing settlers to flee to higher ground to a new site. The legislation had already been introduced in 1839 to move the county seat since it is believed that the Montezuma courthouse had burned that year. Records indicate that the post office located inside the courthouse had closed due to fire and was moved to a citizen’s house for a period of time. The little village slowly relocated four miles east of the original site on the highest point up the hill between the Conecuh and Yellow Rivers, a place of safety on the watershed. The new county seat had changed to Andalusia by July 18, 1844, when the post office was established. Following the Spanish theme, Andalusia was laid out, surveyed, and designed in a square around a plaza, the present court square. There are some who speculate that the leaders in the various beats who vigorously favored moving the town up the hill selected the name since legislation had been introduced in 1939 to move the county seat. 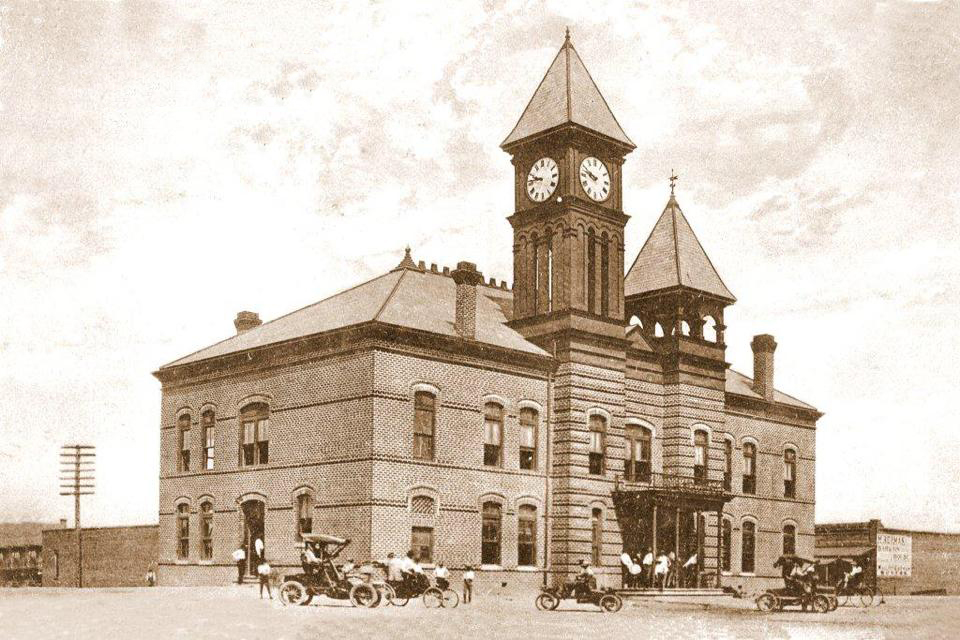 The first courthouse in Andalusia was a two-story square wooden structure built in the center of town between 1844 and 1845 replacing the one at Montezuma. It was consumed by fire on January 13, 1878, destroying all the records. The second courthouse in Andalusia was a two-story frame one with four limestone chimneys, two on each side. It burned in October of 1895 after an unsuccessful attempt in August of that same year. A few records were saved by Probate Judge Malachi Riley which was stored in his safe. The third courthouse was the two-story brick one with a clock tower built in the center of the town square in 1897 that served the county for about twenty years. In 1916, the present courthouse, a much larger facility, was built. This granite and marble landmark building designed by Architect Frank Lockwood is probably the fourth courthouse in Andalusia. It was not until about 1918 that the courthouse in the middle of the square was torn down right at the end of World War I. Soon the garden club ladies promoted the establishment of a landscaped park in the plaza with sidewalks.
In 1868, thinking to please Probate Judge Josiah Jones who had helped to get him elected, State Representative Edward Mancil got a bill passed in the legislature to change the name of Covington County to Jones County. Upon receiving word of what Mancil had done, Jones became so angry, he threatened Mancil with bodily harm. Mancil immediately had the name changed back. Thus, the name of the county was Jones County for the short period of four months. Because Attorney Josiah Jones started the effort to relocate Andalusia from Montezuma introducing most of the bills in the legislature, he is considered by historians to be the “Father of Andalusia.” 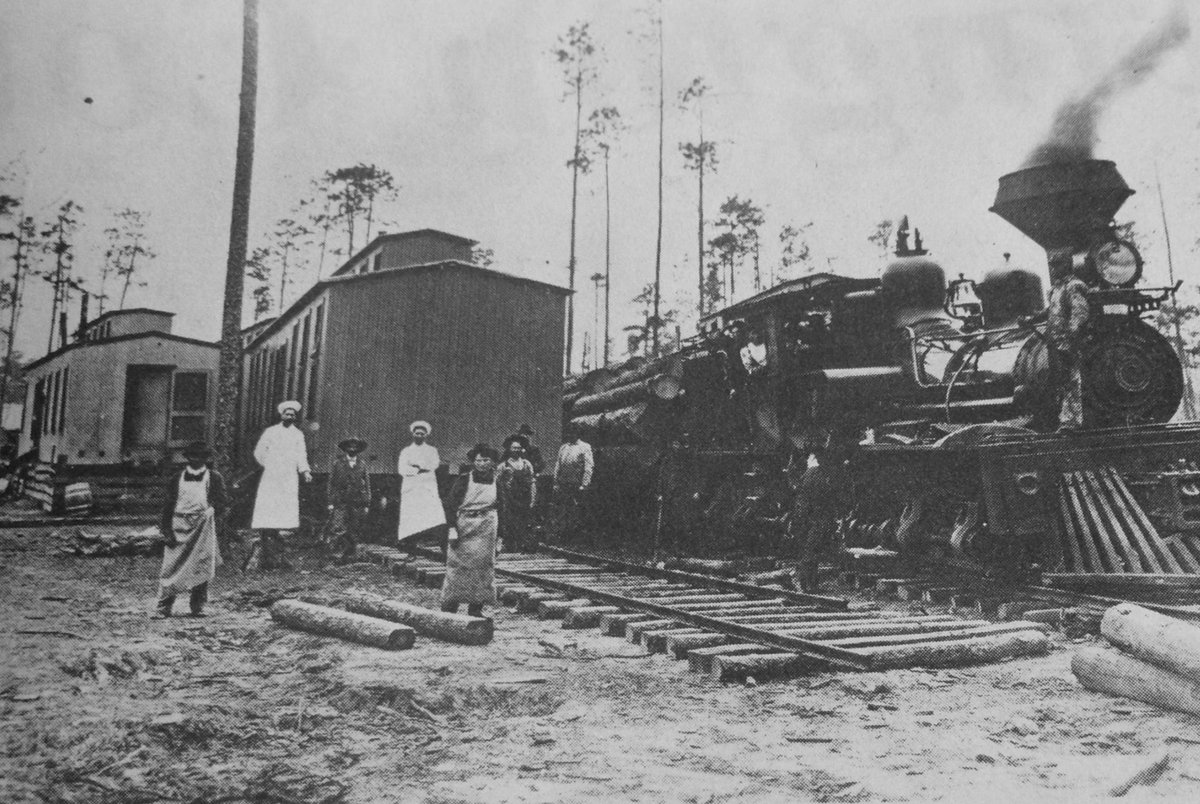 Covington County began its real growth in 1899 when the Central of Georgia extended its line to Andalusia from Searight, and the L & N Railroad ran a line from Georgiana through Andalusia and Opp to Graceville, Florida and on to Florala at a later date. This progress brought new transportation which helped open the area to new frontiers in forest products, manufacturing, and trade. Prior to the “iron horse” arriving, Covington County’s economy was based solely on forest products and agriculture.
By 1900 the population of Andalusia was only 551, but many people lived on scattered farms at the time adding to the population of the entire county. Through the years, the population has grown continuously until the early 2000’s when it leveled off due to the population moving into more modern subdivisions located beyond the city limits. However, the city limits have expanded several times and consists of 18 square miles. The current population of the county seat stands a little over 9,000, the largest town in the county.
Covington County as of 2010 had a population of 37,765. It has an area in square miles of 1,034 which is 9th in land size in the state. In 2010, the city population of Andalusia was 9,015. Opp was 6,659, and Florala on the state line was 1,980. Covington County has 10 other incorporated towns: Red Level, River Falls, Carolina, Libertyville, Sanford, Heath, Gantt, Lockhart, Onycha, and Babbie.
Being 80 to 125 miles from any city of large size, Andalusia is a center of business and trade for a wide area. It is also close enough to several large cities such as Dothan, Montgomery, Mobile, and Pensacola so as not to be isolated from the large centers of trade. Much growth is expected in the 21st century inasmuch as the city is located 85 miles from the Gulf of Mexico with a mild climate year-round; the recreational, educational, and religious opportunities are numerous; and its citizens and local government are friendly and progressive welcoming newcomers to its gates.